Known as “The Pillars” many years ago,  people believe that the grand old building that The Village Stores occupies has been many things throughout its time, but as far we know, it has always been a shop. According to the Roman numerals the building The Village Stores was built in 1836 by an apothecary. The shop then became a part of the Midland Co-Op, before being bought into private ownership by Gordon Stone, who had worked in the shop since he was a boy.

To look at, the building has changed very little over the years, but in recent memory there has been extensive work to repair the frontage which was at one time falling away from the building. 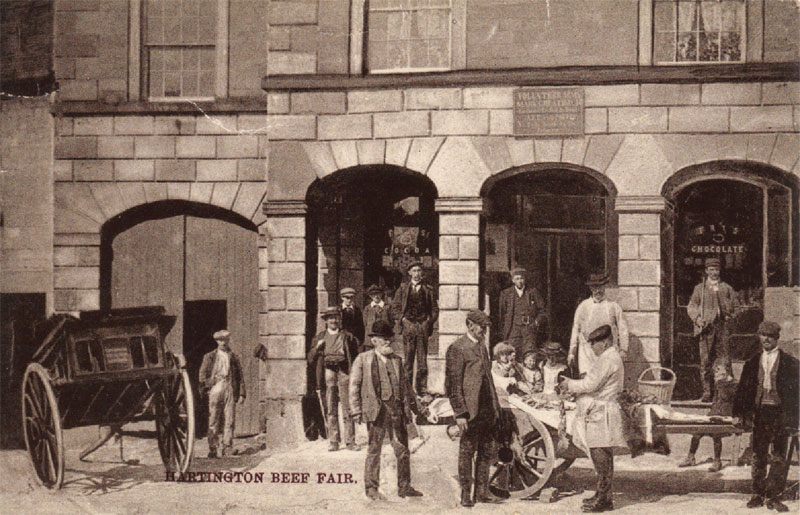 This picture was taken in around 1896 and shows the Beef Fair that was held in Hartington once a year in August at the beginning of Wakes week. The butcher pictured in the foreground is said to have come from the Longnor butchers Mellor and Cundy and that the cart on the left belonged to a baker from nearby Winster who came to the village once a week.

The sign above the central arch is the licence for the Volunteer Arms, and ale house located in the rear of the shop in the room that we now use as a kitchen. The licence reads

I’m afraid there is no more drinking on the premises, but we are still licensed and ensure a good stock ales and porters for you to take home with you!

Based in the glorious Peak District in Derbyshire we are a local village stores with a passion for great food and drink. @thevillagestoreshartington

And then…we were closed. Just for Christmas of c

‘‘Twas the last weekend before Christmas and a

Christmas is on its way at The Village Stores! Thi

These two freshly made, family-sized, Shepherd’s

Frosty mornings are upon us and we’re not unhapp

Autumn is definitely here and we’ve got some war

On Monday 19th of September we will be closed all

Here’s something new from The Village Stores thi

We’ll be nipping up to @the_old_chapel_hartingto

Super satisfying sausage rolls are the order of th

For those of you that have been following along wi

Did you know that there is has been a marathon run

More things to share with you this weekend… Our

Today we received a delivery of these gorgeous cho

Who doesn’t love a basket of purple sprouting br

We didn’t think we could love @buxtoncoffeeroast

When a member of your team makes *you* a leaving p